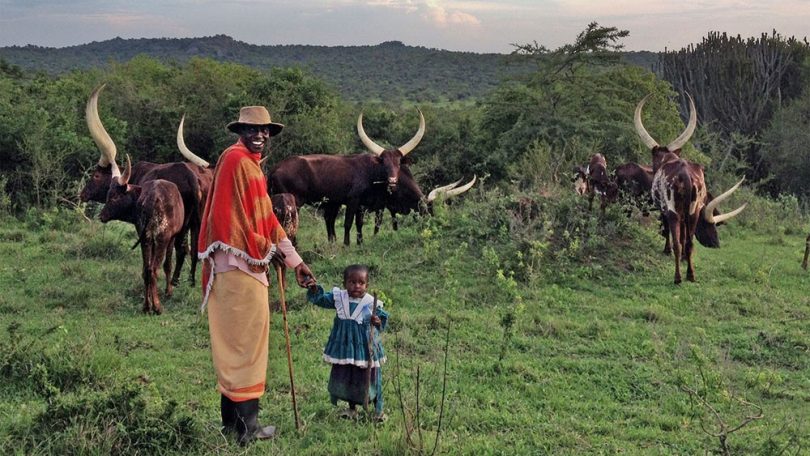 When it comes to Uganda cultural safaris and tours, the Ankole cultural encounters are exceptionally worth including in your bucket list. Banyankole people belong to the Bantu group and they are mostly found in the districts of Mbarara, Kiruhura, Isingiro, Bushenyi, Ibanda and Ntungamo in Western Uganda.

The residents of the Rujumbura and Rubando counties in Rukungiri district equally have similar culture with the Banyankole. Initially, the Ankole also called Nkore is believed to have been adopted around the 17th century based on the devastating intrusion of the Kaaro-Karungi by Chawaali, the Omukama of Bunyoro-Kitara at a time.

Bunyoro Kitara was one of few most powerful Kingdoms that East Africa had at a time especially from the 16th to 19th century. The word Ankole existed at the time of the British colonial masters who used the term to describe the larger Kingdom that was established by incorporating it to the ancient Nkore, the previously independent Kingdoms of Igara, Sheema, Buhweju and some of parts of Mpororo through Ankole agreement.

Ankole kingdom was established in the early 15th century making it one of the ancient traditional dynasties in Uganda. Ankole dynasty was separated into 2 (two) stratified castes the Bahima-the renowned nobility and pastoralists and the Bairu the famous farmers/peasants who stayed harmoniously and depended on each other.

The Ankole Kingdom became extensive by annexing other territories from south and east. In some instances, conquered herders were added into the dominant Hima stratum of society and farmers were adopted as Iru or slaves and treated as legal inferiors. None of the groups had ownership of the cattle and slaves wouldn’t herd cattle owned by the Hima.

The Ankole dynasty evolved into a system of ranked statuses where even among the cattle owning elite, patron client ties were significant in keeping the social order. Men offered cattle to the King to show their loyalty and to mark life cycle changes or victories in cattle raiding. This kind of loyalty was tested for several times by the king’s demands for cattle or for military service. In return for homage and military service, a man got protection from the king both from the external and factional disputes with the rest of cattle keepers.

The Mugabe ordered his strongest chiefs to recruit and lead armies on his behalf and the warrior bands were charged with protecting Ankole borders. Only Hima men would serve in the army however the limitation on Iru military training almost eradicated the threat of Iru rebellion.

Just like any Bantu group, the Banyankole also have a background that is worth tracing. It is believed that Ruhanga-the creator was their first occupant in Ankole Kingdom who is also believed to have originated from heaven to rule the earth. He is believed to have descended with his 3 sons of Kairu, Kakama and Kahima.

There is a tale concerning the way Ruhanga gave a test in order to determine which of his sons was to be his heir. The test involved keeping milk filled pots on their laps the whole night. At the end, the youngest son-Kakama was noted to have passed the test followed by Kahima and the eldest Kairu was the last.

Based on the performance, Ruhanga is believed to have decreed that Kairu and Kahima could serve their brother Kakama. After, he returned to heaven, leaving Kakama or Ruhanga as he was called to rule the land. This legend comes with social stratification in Ankole dynasty.

It was devised as way to make Bairu accept their sub servant position to the Bahima being supernatural. Ankole Kingdom featured mainly centralized administration system led by the Omugabe-the King who was from the nobility Bahima class, helped by Abakuru b’ebyanga-the local chiefs and the general appointed Enganzi-the prime minister.

In Ankole Kingdom, cattle keeping featured as the main activity for their livelihood and milk, ghee, hides and beef, cows featured as a means of value and medium of exchange. Cows featured as the means of payment especially as bride price and some special cows were used for religious rituals and cultural and political events. The long horned Ankole cattle were most valued as they were adapted to the climatic conditions of the area and their ability to resistant most of the diseases. A cow was valued for the amount of milk it yielded, its size and stature, body color and for the shape and whiteness of its long horns and its ancestry.

Culturally and traditionally, the usual way for marriage in Ankole was for all parents of the boy and girl to plan the marriage, at times without the girl’s knowledge. The initiative was usually taken by the boy’s parents and up on payment of an appropriate bride wealth, plan could be made to collect the bride.

Customarily, a girl wouldn’t be given out for marriage when her elder sisters had not. In case the marriage offer was made for a young sister, it is believed that the girl’s parents could manipulate things till the elder sister is sent. And when the bridegroom comes to know it he wasn’t supposed to raise any questions. He would proceed and pay more bride price and officially get married that is at all he is able to pay the bride wealth. It was the boy’s parents (father) responsibility to pay full bride wealth and meet the rest of the costs involved in planning for his son’s marriage.

At the time of wedding, the girl could be escorted by others including the aunties and some traditions believe that the husband could first have sex with the aunt prior continuing having intimate with the bride. Others assert that the duty of the aunt was to affirm the potential of the bridegroom by simply looking or listening to the sexual intercourse between the bridegroom and her niece. This is believed that her duty was to advise the girl on the way to start her home as Ankole girls were meant to be virgins till marriage time. However, not all these traditions are factual as things have changed to day.

To Banyankole, illness isn’t a natural cause of death; such deaths need an investigation to find out the exact cause. However, old age is accepted as a cause of death. It is believed that God the old people to die after the accomplishment of their time on planet. Banyankole look at death as a passage to another world. Once a man passes away, each relative together with friends and neighbors are informed.

A person who fails to make it to the funeral without a strong reason will be suspected to be the one who killed the person who died. Prior the burial the body is washed and the eyes are closed. As the dead is placed in the grave, the right hand is put under the head while the left hand rests on the chest. His body lies on the right side and one or more cows can be slaughtered to feed the mourners.

Beer is offered as part of the mourning. Usually, the mourning takes about 4 days. The woman who dies is also treated the same way the only difference is that in the grave she can be made to lie on the left side like she were facing the husband. Her left hand is put under the head and the right hand rests on her chest.

In conclusion, Banyankole are Bantu speaking people and like any ethnic group, they feature the most incredible cultural and traditional traits that are worth exploring while you are on safari in Uganda. For visitors on gorilla safari to Bwindi Forestand Mgahinga National Park or wildlife safaris to western Uganda, never miss to explore more about the Ankole culture for you to get thrilled by lifetime experiences.