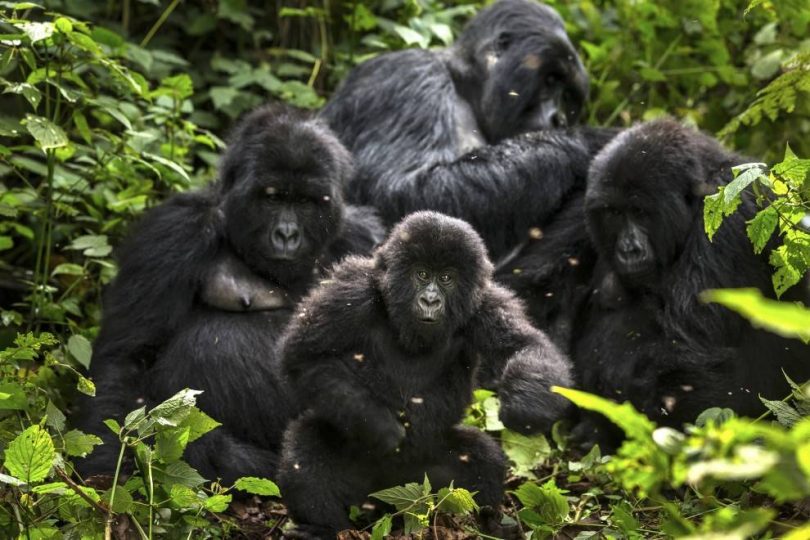 Uganda “the pearl of Africa” and the homeland for every traveler and the best destination for anyone away from home. Whoever going for a vacation in Africa, the only available interesting place is Uganda, starting from the people who are hospitable, the favorable climate Wet and dry throughout, the fascinating culture, the physical features are the back born to Uganda’s tourism since it has the home to the most visited wildlife species, bird species, plants and many more. Uganda is brimming with wildlife treasures such as chimpanzee trekking, gorilla trekking, mountain climbing, game drives, boat safari, horse riding, birding safari, white water rafting and kayaking, and many more. 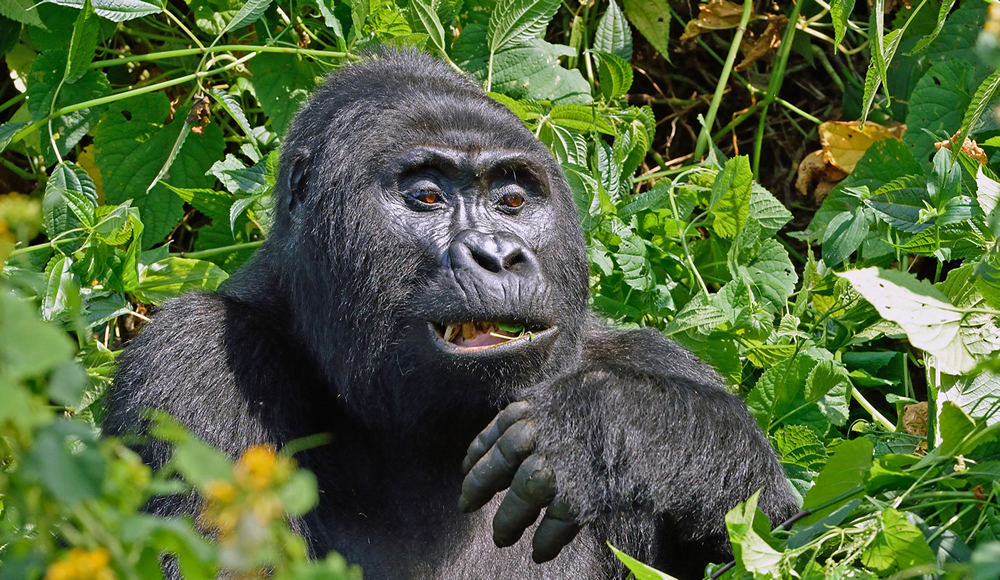 It’s located in southwestern Uganda and is home to a colossal of mountain gorillas the second cousin to man after the chimpanzees. The park is situated along with the democratic republic of Congo on the edges of the western rift valley. Mountain gorillas are also found in the Virunga national park in Congo and volcanoes national park in Rwanda. However, Bwindi Impenetrable National Park inhabits the largest population of the mountain gorillas in the world, the jungle also harbors other primate species such as chimpanzees and birds which are a great attraction to tourists. Gorilla trekking, Batwa experience, birding, community tours, guided nature walks are the main tourist activities in Bwindi National  Park. 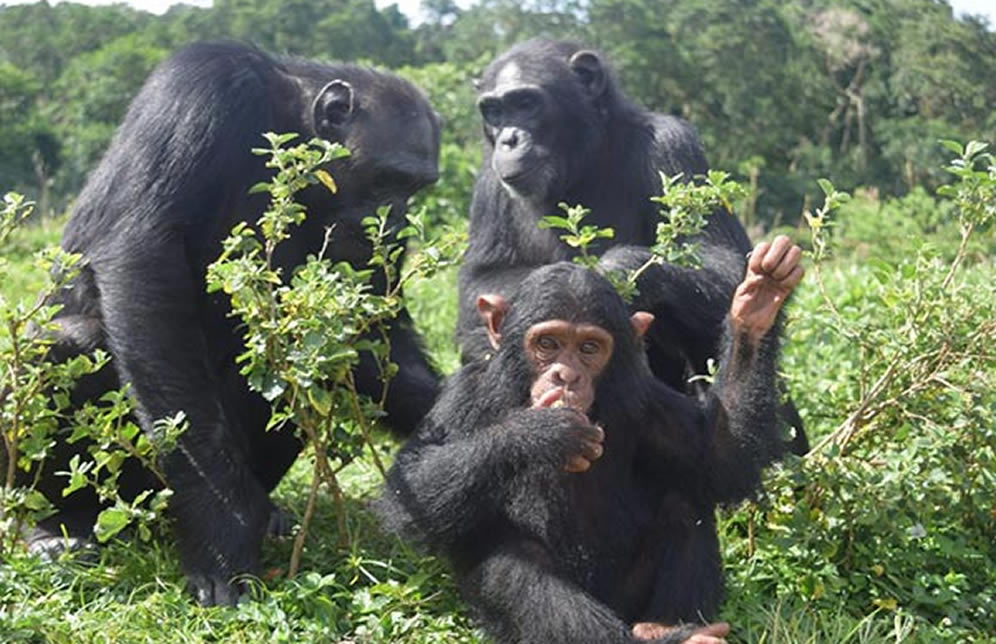 It is a popular Chimpanzee sanctuary situated on 95 hectares of the forested islands on Lake victoria. The island was established in 1998 and made a home to rescued and orphaned chimpanzees. Every chimpanzee at the park has a name and its told story which is interesting to hear from the guide. There 49 chimpanzees at Ngamba 22 male and 27 female lead by the silverback. While at Ngamba, you will get exposed to man’s closest cousin the chimpanzee and their lifestyle of feeding, shelter, mating, communication towards each other, and many more. Expect activities such as chimpanzee tracking, fishing on Lake Victoria, and sunset boat cruise. 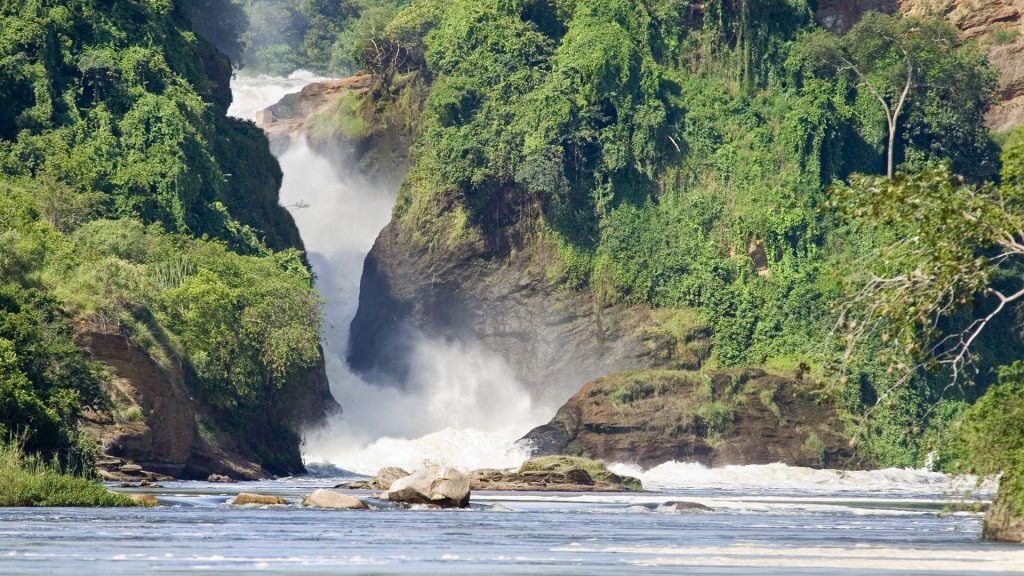 It is found in the northwestern Uganda of about 3840square kilometer. It is Uganda’s biggest national park gifted with abundant wildlife species with different mammals species such as the big five mammals, warthogs, oribis, topis, Jackson’s hartebeest, giraffes, Ugandan kob, duikers among others. Day and night game drives, birding, nature safari walks, boat cruise, hiking, bush camping, and chimpanzee tracking/habituation experience in Budongo forest are the main tourist activities in the park. The park is famous for its magnificent Murchison falls where the park name originates from.

This national park is found in the western region. It was established in 1933 with the aim of protecting a vast piece of recently managed as a logged forest reserve. It contains protected most evergreen rain forest with an important eco-tourism and the best safari destination famous for its high population of habituated chimpanzees and of the other primate species. This park is best for chimp tracking and habituation experience in Uganda. 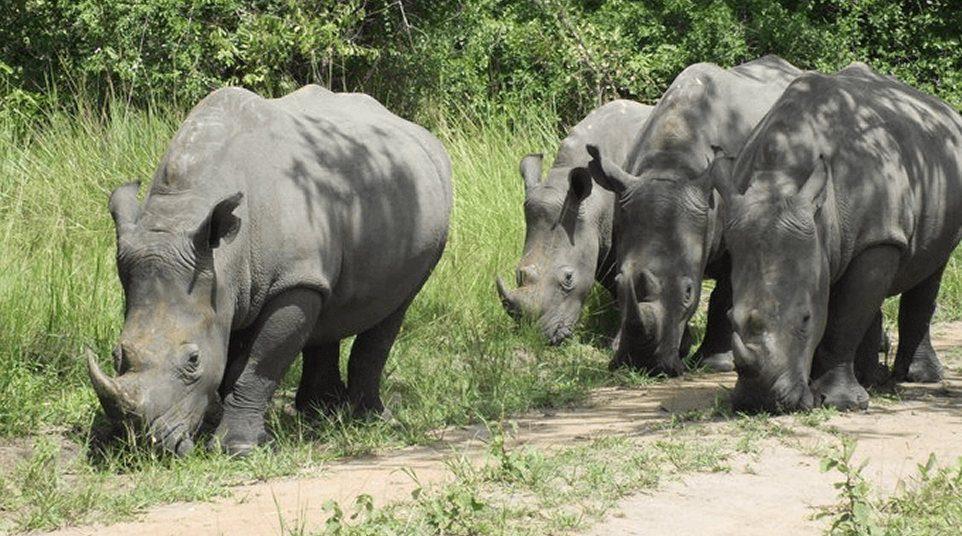 It is situated about 175km of Kampala-Gulu high way in Nakasongola district. It is popular for white rhinos and the only sanctuary to poses one of the big five mammals of Uganda. It offers the best rhino tracking destination safari and a few have been spotted Uganda Wildlife education center in Entebbe. 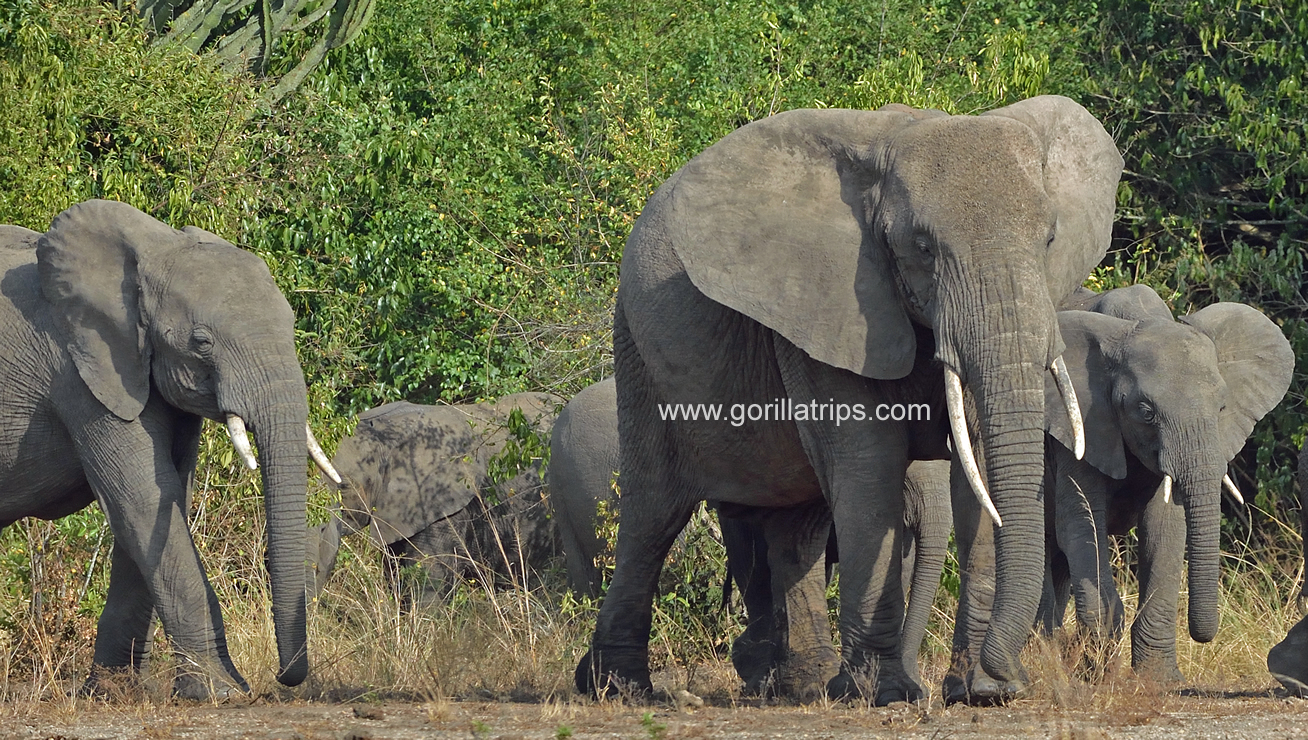 The park is located in the southwestern part of Uganda occupying an area of 764square meters in a region of rolling plains. It’s popular for its tree-climbing lion in the southern sector of the part called Ishasha. It harbors a variety of wildlife species such as hippopotamus, elephants, leopards, lions, chimpanzees, and other primates in Kyambura Gorge and over 600 bird species are spotted launch cruise at the mighty Kazinga channel. 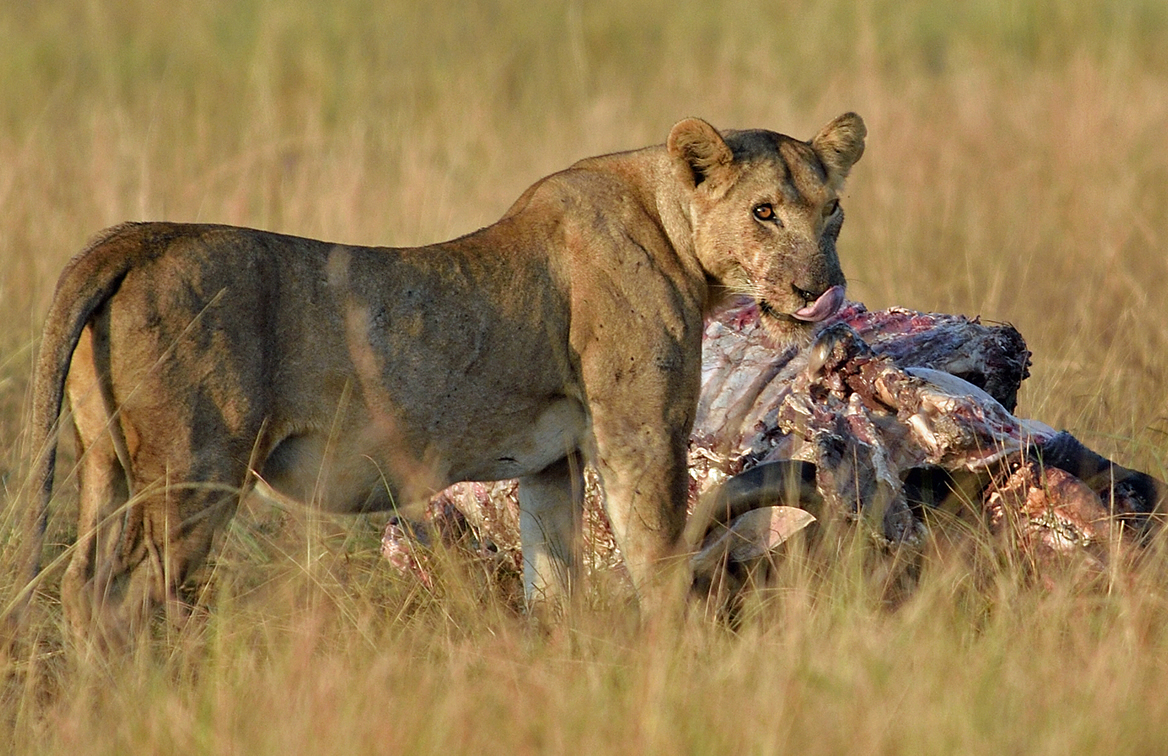 This is found in the northeastern section of Uganda in Karamoja district. The park borders Uganda and Sudan and it describes the true wilderness of Uganda’s jungle. Kidepo valley national park is embraced with numerous features such as the Narus River and Kidepo valley which are seasonal rivers and the Kanangorok hot spring near the Sudan border. The park game drive ranked the best with a  variety of game-like leopards, bush duikers, jackal’s, striped hyena, bush babies, and the rare bird which does not fly but move faster the ostrich. A meeting with the might Karamojong tribe is unforgettable, you get to participate in their traditional dances of high jumping in the process of getting a wife.

This is situated in the southwestern part of Uganda between Kisoro and Kabale close to the Rwanda border. It’s the second deepest lake in Africa and one of the beautiful lakes in Africa consisting of 29 islands of different sizes and shapes. It derives its name from the colossal small bird species that live by the lake. It exposes you to the sea breeze and allows one to take in the beauty, relax and chill after the long gorilla trekking in Bwindi impenetrable forest.

Lake Bunyonyi is the perfect place to invest your money into and get high profits in form of lifetime memories. The islands can be spotted while at a boat safari on Lake Bunyonyi and every island has its story such as the punishment island where unmarried girls who got pregnant were dumped and left to die. Expect the best of the best on Lake Bunyonyi such as swimming, dugout canoeing, nature walks and hikes, mountain biking around the lake, bird watching, cultural encounter of the Batwa, and island exploration among others

It is found about 30km by the road east of Mbarara the largest city in the western region. It is commonly known for its abundant wildlife species such as buffaloes, giraffes, zebras, hippos, crocodiles, elands among others. Many travelers who have been able to make their way to lake Mburo have had a lifetime experience through nature walks, canoeing, game drives,  bird watching, sunset viewing among others.

This is one of the smallest national parks and another home to the endangered mountain gorillas. It is located in southwestern Uganda, a few kilometers from the popular Bwindi National Park. The major things to do in Mgahinga National Park are; gorilla tracking, golden monkey tracking, bird watching, Mountain hiking (Gahinga, Muhabura, and Sabyinyo), nature walks, and the Batwa trail.

Rwenzori Mountains, also known as mountains of the moon are among Uganda’s most adventurous destinations especially for those interested in mountain climbing adventures in Uganda. The park covers approximately 100,000 ha in western Uganda including the main part of the Rwenzori mountain chain where we find the 3rd highest peak in Africa known as Mount Margherita at 5109 m. The Rwenzori mountains glaciers, lakes, and waterfalls make it one of Africa’s most beautiful alpine areas.