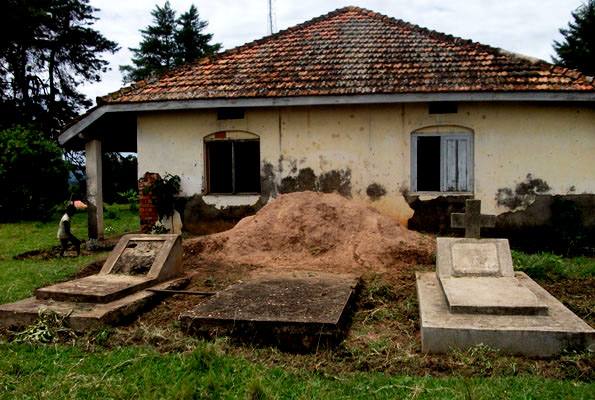 Nkokonjeru Royal Tombs are one of the popular sites that now remain of the once powerful and famous Ankole Kingdom in the western side of Uganda. It is always a common thing in African culture to have graveyards and just like other Kingdoms in the country, the Ankole Kingdom also has a site that was purposely set aside as a burial place for the former Monarchs/Kings thus making it one of the vital attractions in the Monarchy.

Found within Kakiika division of Mbarara District at approximately 3 kilometers from Mbarara Town center, the site is a place where the last two Kings were laid to rest-Omugabe (King) Edward Solomon Kahaya II who was buried in 1944 and Omugabe Sir Charles Godfrey Rutahaba Gasyonga who was laid to rest in 1982 after 23-year old reign and their Tombs are inside a modern house of colonial style with two concrete slabs.

Outside the house are about 8 graves of other Royals like Princes and Princesses. A new person or a passerby will see it as an ordinary house but it holds the rich cultural history of Ankole Kingdom although it seems that the Kingdom currently lost control over the land because it is said that the land was secretly sold off to private developers while some parts are being grabbed by the residents and the Kingdom officials don’t seem to have a clear answer for the abandoned site. This is partly attributed to the fact that Ankole Kingdom was never reinstated when other Kingdoms like Buganda, Bunyoro and Toro were brought back by the current President-Yoweri Kaguta Museveni after they were abolished by former President-Dr. Apollo Milton Obote.

Even in its abandoned condition, it still holds a lot of cultural value thus you can add it on your itinerary when visiting western Uganda especially Mbarara district. Besides this site, it is said that this Kingdom has lost most of its Cultural Centers mainly because it lacks functional Institutions like we see with other Kingdoms in the country.  Besides the Nkokonjeru Royal Tombs, there are several other significant Royal burial places worth exploring during Uganda safaris and they include Mparo Royal Tombs in Bunyoro and the Kasubi Tombs of Buganda Kingdom. You can add these sites on your itinerary for cultural tours to discover several mysteries about such sites.

In conclusion, much as it has been abandoned and most of its surrounding areas encroached or sold off, Nkokonjeru Royal Tombs is one of the most significant cultural sites in Uganda because the site is a resting place for the last two Kings of Ankole Kingdom-Omugabe (King) Edward Solomon Kahaya II who was buried in 1944 and Omugabe Sir Charles Godfrey Rutahaba Gasyonga buried in 1982.