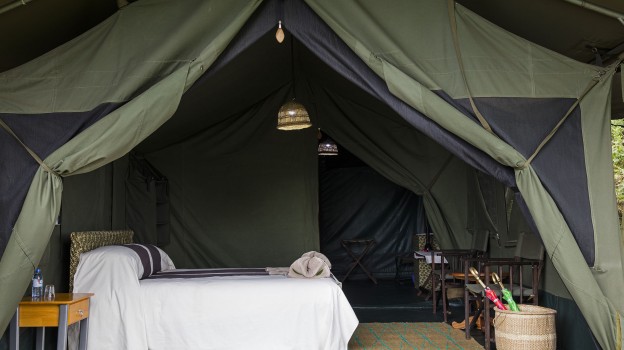 Lulimbi camp is one of the newly established camps in the Virunga National Park. It was opened in July 2016 and it is established on the Ishasha River. It features the Queen Elizabeth National Park on Ugandan side at a distance across the River bank and hence Lulimbi has access to the central parts of the Virunga where it is possible for one to embark on thrilling safari and view several species of wildlife especially the hippos, elephants, Uganda Kobs, warthogs, topis and buffaloes and birds like the eagles and storks. Several crocodiles can easily be spotted as they bask on the sand banks. The camp is situated about 160 kilometers off Virunga National Park.

Safaris can also be planned for visitors who spend a night at Lulimbi tented camp as you set off using a four by four safari vehicle. You will take a walk to the savanna grassland to Lake Edward which equally rewards visitors with lifetime experiences. Early morning walk to Lake Edward is followed by bush breakfasts under the trees and game drives. While on walking safaris, expect to spot out most of the warthogs, elephants, Uganda Kobs, Topis and many more. The walks and drives are usually guided by the experienced rangers of the Virunga National Park.

Lulimbi camp comprises of 8 (eight) tents that are stretched out on the river and it also features solar heated water and toilets. Every tent comes with a small verandah from where visitors can catch a glimpse at the River and several pied kingfishers as they are hovering around the hippos that usually reside within the Lulimbi area.

This tented camp lies just on the right side of the river and it is major meeting area for sunset viewing and hippo viewing. For lucky visitors, you can even spot out most of the elephants as they wander around the water areas crossing freely between Uganda and the DR Congo. Delicious food is served at the camp with unique things that will make up your experience.

In conclusion, Lulimbi camp is a newly set up accommodation facilities and it features among the best areas that are worth spending a night over while you are on safari to the Virunga National Park. Overnight stay at this camp rewards visitors with total comfort that any traveler wishes to have while on safari. If Virunga National Park is your dream destination this coming vacation holiday, the camp should be a must to include in your travel plan.