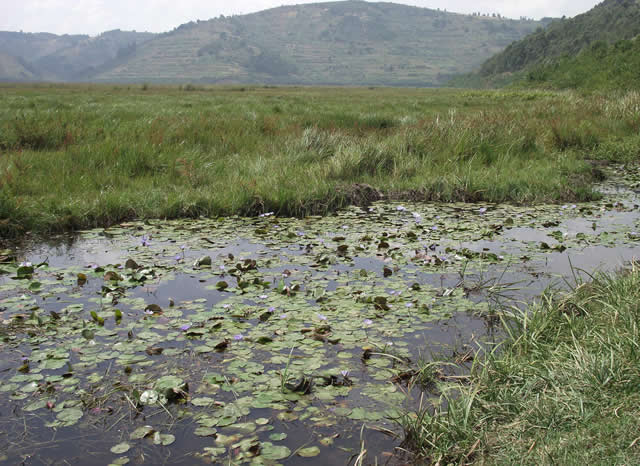 While gorilla trekking is the main activity that allures most tourists to remarkable Rwanda, birding within this country is rewarding and leaves unforgettable experiences. With more than 700 species of birds with a small country like Rwanda (extending for only 26,338 square kilometers), it is obvious that are many birds per square kilometer, hence you can’t compare the birding experience here to other larger countries. Its location within the Albertine Rift as well as the thick forests, many mountains or thousands of hills, swamps and wetlands, grassland plains, lakes and rivers that characterize Rwanda’s landscape is an icing on the Cake because these extraordinary environments are habitats for the unique bird species you will discover when you visit the country.

Interestingly, Rwanda is one of the few places on Earth where you will be able to spot majority of the Albertine Rift endemic bird species and bird watching can be enjoyed all year round much as the rainy season (March to May and October to November) offer the best chances of seeing many migrant birds (mainly Palearctic and wintering migrants) that usually flock the country. Nonetheless, the best stops for memorable birding experiences in Rwanda include;

The Albertine Eco-region is comprised of a series of mountains that were particularly formed from volcanic activity and uplift in the area, extends across the western side of Rwanda and comprises of five other African countries (including Uganda, Burundi, Democratic Republic of Congo, Zambia and Tanzania). This region has always been referred as the “Center of the Afro-montane habitat” and boasts of extraordinary endemic fauna and flora including more than 40 species of birds including the Rwenzori nightjar, handsome francolin, Stripe-breasted Tit, Grauer’s warblers, Rwenzori turaco and many others. In addition to the unique bird species, the Albertine Eco-region is also a home to 34 mammal species, 117 butterflies, 34 Amphibian species and 16 species of reptiles.

This Park is found in the south-western side of the country, comprising of a tropical montane rain-forest that separates the Congo and Nile river systems but protects the East and Central African region’s most extensive montane rain-forest. This Forest National Park is a haven to over 310 species of birds including 27 Albertine Rift endemics, hence making it one of Rwanda’s most prominent and spectacular birding stops. Common species of birds to look out for in Nyungwe Forest National Park include the blue-headed sun-birds, handsome Spurfowl, Red-collared babblers, regal sun birds, the Grauer’s swamp warblers, Albertine owlet and Rwenzori Batis among others.

As the gateway into Rwanda, Kigali City is undeniably the first birding stop in the country and there are several must-visit birding spots that offer remarkable birding experiences in this City and they include Nyabarongo wetland and Nyarutarama Lake (also referred as the “Lover’s Lake”) bordering the Kigali Golf Course. Notable bird species in Kigali City include the Cardinal woodpecker, African rock pigeon, the African grey hornbills and brown-throated wattle eye among others.

Unlike what most tourists think, Volcanoes National Park is an important birding watching spot besides being an outstanding gorilla trekking destination. The Park is part of the extensive Virunga Conservation Area and home to five of the Virunga Volcanoes including Karisimbi, Bisoke, Muhabura, Sabinyo and Gahinga. However, there are over 180 species of birds in the Park including 17 species that are endemic to the Park, but common species not to miss here include the handsome francolin, Rwenzori Apalis, Rwenzori Batis, dusky flycatcher, red-billed firfinch, the cinnamon-chested bee-eaters and Chubb’s cisticola among others.

Over 10% of the country’s landscape is dominated by marshlands and wetlands, with the common ones being Nyabarongo, Rugezi and Akanyaru wetlands that are habitats to wetland and aquatic bird species.

As the only Savannah Protected Area, Akagera National park is sprawled within the north-eastern corner of Rwanda overlooking the high-rising Albertine belt and covers a vast savannah area interspersed with rolling grasslands as well as acacia and broad-leafed woodland crossed by River Akagera. This Park offers shelter to the country’s highest numbers of birds species totaling to over 525 species including the white-collared olivebacks, red-faced barbets and Sousa’s shrike among others.

Akagera National Park is made up of numerous Lakes and wetlands along the banks of River Akagera as well as the eastern border of the Park, and these are homes to several wetland and aquatic bird species such as the shoebill storks, Papyrus Canary, Caruther’s cisticola, Papyrus gonolek and Papyrus yellow warblers.